In this article I wrote about my favorite phonographs. Every collector has their favorite pieces in their collection, this maybe the first piece they bought, a piece they just had to have or the one they cant seem to get their hands on. We all have our favorites, here are mine.

The Victrola XVIII was the most elegant non-custom phonograph made by the Victor Phonograph company. It was introduced in 1915. The Victrola XVII cabinet was fancy hand carved with finely detailed veneer. It had bowed front and side panels. Rare wood finishes were available. There were very limited sales of the Victrola XVII due to the production cost and the selling price of $300 for the standard model. Within a year Victor introduced the less expensive XVII. The Victrola XVII replaced the XVIII as the premier production model.

Edison Opera, introduced in November 1911, possibly gave the best sound of any contemporary instrument, cylinder or disc. The horn and reproducer assembly remained stationary and the cylinder moved under the stylus (needle), this made very little mechanical noise. The Opera was offered in two wood types oak and mahogany. Cabinet style differed between the two wood types. The cabinet had pillars in each corner this was a unique Edison design. The cover rested on the case, but could not be fastened. The Edison Opera could not be carried by the top handle. The horn could be mounted with the cover in position though a hold in the lid of the phonograph. Last year of production was 1913

The Victor V was originally the “Victor D” model in 1903. In 1905 the Victor D became the Victor V. Around 1906 the tapered arm was first introduced, but there was overlap in production with the indistinguishable D Model series. Selling for $60.00, it featured a large triple-spring motor, brass horn and tapered tone arm. The cabinet was only made in oak. In 1909 the cabinet design was updated without the gingerbread carving. The Victor V was manufactured until the early 1920’s. By the time production ended the price had reached $67.50. Roughly 51,000 Victor V phonographs were produced. If you include the Victor D phonograph about 70,000 where made. During late production, some Victor V Phonographs were produced with a mahogany finish. These phonographs are quite rare.

The Edison Amberola 1B played only 4 minute cylinders. You could change the reproducers as follows:

Both the A and B Amberolas were expensive starting at $200 for mahogany or oak cabinets to $250 for walnut cabinets. The playing mechanism of the Amberola is extremely similar to that of the Edison Opera phonograph

This phonograph has a bombe style case that is approximately 47â€ high and 18 1/2â€œ square at the base of the phonograph lid. There is a open carved removable screen that covers the internal horn. This is the best looking phonograph Sonora produced.

The VI was a slight upgrade from the base model Victor IV (4) model. Production of the Victor VI was started in October of 1911. The Victor VI was discontinued in 1925. In early production models were available only in oak; eventually both oak and mahogany versions were manufactured. In the first few years of production, the Victor VI came with a 10-inch turntable. In 1913 this was upgraded to the full 12-inch size. The progressive suffix letters after the serial number indicate minor changes to the design of the Victor VI

The “XVI” was the original internal-horn Victrola. The Victor XVI was officially introduced in 1906. The Victor XVI was originally advertised as “Victrola the Sixteenth” (XVI), the Victor identification tag used a “VTLA” designation in the early years of production. The Victor VTLA had a flat lid cabinet design with unusual â€œLâ€ shaped front doors; these were used to hide the record storage area.

In 1902 Victor introduced the Victor MS. This was an upgrade to the Victor Monarch. The Victor MS sold for $45.00. It had Victor’s powerful 3 spring motor, and an oak cabinet. It underwent quite a few cabinet design iterations during the production run. The Victor MS became the Victor IV around 1905. Approximately 11,000 Victor MS phonographs were produced.

I hope you enjoyed reading about myÂ  favorite phonographs. Do you have a favorite antique or collectible? If so please share it with us in the comment section of this article. 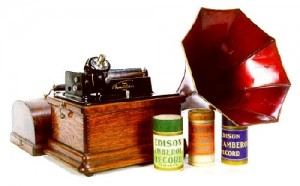