Queen Anne style furniture is one of the most recognized and popular style of antique furniture. Have you ever wondered how it came about and got its royal name? In this article I will explain the history of the furniture style and its name.

During Queen Anne’s reign (1702-1714) she introduced the custom of social tea drinking. This created a need for small movable furniture such as:

This also created a demand for matching accessories such as:

During this era of furniture the tilt-top tea table was first made. Queen Anne style remain popular in modern furniture production.

Characters of the Queen Anne Style

Queen Anne furniture bought in light, curvy and dainty type furniture. This was a dramatic change from the heavy masculine furniture of styles past. This furniture has distinctive characteristics such as:

The most distinctive and recognizable character of Queen Anne furniture is the Cabriole legs. 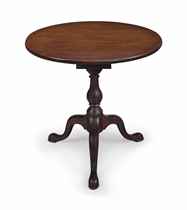