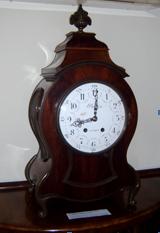 The first clocks were public tower or turret clocks. They were meant to be heard and not seen, so they didnâ€™t have dials or hands. They were basically automatic bell sounders.

Until the first decade of the 19th century, both European and American clocks were products of the craftsmanâ€™s shop. Many people were required to produce these clocks. Turners, metalworkers, and joiners were needed to produce just one clock. This would eventually change with industrialization and the standardization of parts.

The earliest American clocks were grandfather clocks. The tall-case clocks were made to hold the weights, which hung from cords turning the movement. A long pendulum regulated the timing. Master craftsmen like Peter Stretch of Philadelphia and Simon and Aaron Willard of Boston created these early handcrafted clocks.

But it was Connecticut clockmaker Eli Terry who brought mass-production to clock making. He succeeded in standardizing parts and also designed a reasonably priced shelf clock that made it possible for people to own their first clock.

Most every clockmaker put his name somewhere inside the clock he produced. It could be on the dial or movement, or a glued label on the case. Famous clockmakers like Eli Terry and his apprentice Seth Thomas are what collectorâ€™s crave. They also have an interest for authentic clocks in working condition, with original parts and unmarred cases.