Goebel Hummel figurines have been a favorite amongst collectors for many years. This figurines usually depict children doing various activities. Hummels are earthenware figures that are hand painted with warm color pallets.

There are many different types of Hummel items that have been produced and sold over the years. It is a good idea to have a price guide handy if you are planning on becoming a collector or looking to sell your collection. Prices can vary drastically from one place to another. Hummel prices fluctuate each year however the more rare ones tend to have a more consistent value.

History of Goebel and Hummel Figurines 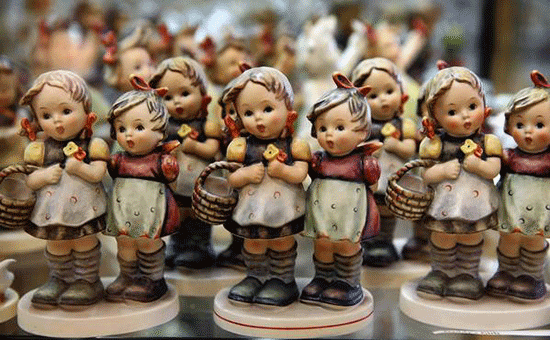 1879: W. Goebel Porzellanfabrik started making porcelain in Oeslau (later known as Rödental), Germany.  At this time they had a limited range of items they products. This was limited to dinnerware and figurines

1931: Goebel expanded their production line to include the following

1934: Goebel started to looking at producing a line of figures that captured the innocent and sweetness of children. Franz Goebel, saw drawings by Sister Maria Innocentia (Berta) Hummel and approached her about creating the Hummel line of figurines.

After Franz saw these drawing the first three clay models were produced.

The product of these models were completed in 1934 and shown to Sister Maria Innocentia. This is when she agreed that Goebel could use her images to create designs for Hummel figurines with one condition.

Sister Maria Innocentia had final approval of each piece, and that each piece bear her signature.

This tradition continues even today. Each Hummel is marked with “M . I . Hummel,,” printed on or incised in the underside of the figurines. When Sister Maria Innocentia died in 1946 the approval condition went to the Convent of Siessen and they must approve of each figurine  before production.

1946: Sister Maria Innocentia’s health took a turn for the worse. She died at the age of 37 of respiratory complications. This was later found to be tuberculosis.

Sister Maria Innocentia Hummel left behind an impressive collection of drawings, allowing the production of figurines to continue after her death. 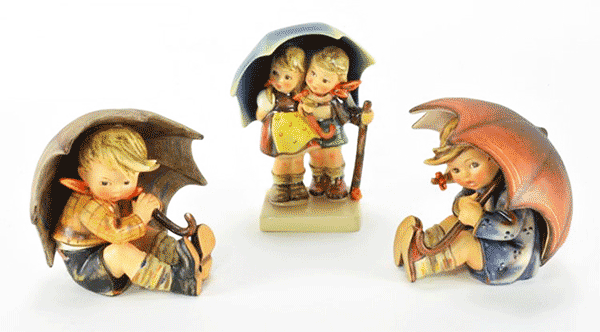 1935: Goebel Hummel figurines were launched in March of 1935, at the Leipzig Spring Fair.

1949: In post-war Germany, the figurines became popular once more. U.S. soldiers stationed in Germany sent these figurines home as gifts. This introduced them to American homes and made more popular than ever.

1971: Goebel expanded the range of Hummel items to:

1977: The Goebel Collector’s club was founded.

1989: The Goebel Collectors club was opened to fans all over the world, and the name was changed to the M . I . Hummel Club.

Note: Goebel produces figurines that are not affiliated with Hummel. In other words, not all Goebels are Hummels, but all Hummels are Goebels.

Note: The artist’s stamped or incised signature should be on each piece, regardless of the era.

Note: Goebel stopped producing Hummels in 2008. Production was started again by Manufaktur Rodental GmbH in 2009. Hummel products now have the TMK 9 mark of a broken oval containing the words “Original M.I. Hummel, Germany,” with a bumblebee.

There are other markings that can be found on Hummel figurines. These markings usually have to do with size or decoration variations. The following article will explain the Hummel numbering system in-depth.

How to Understand the Hummel Numbering System

M.I. Hummel figurines are models of the drawings of Sister Maria Innocentia Hummel. However the Berta Hummel products and figurines are inspired by her artwork.

These figurines are not models of her drawings, but are authentic Goebel Hummel products. They were produced in the Far East until they were discontinuation in 2007. 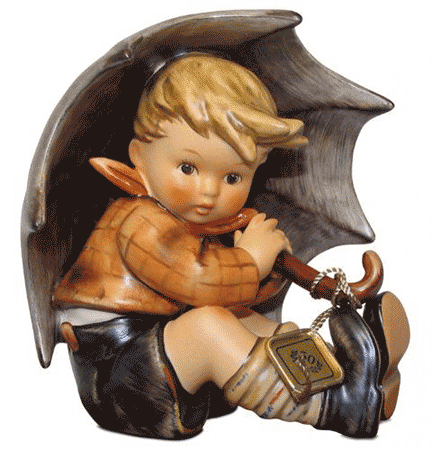 Fluctuations in the Hummel market could mean that items can decrease in value. Owning a piece that is special for reasons other than investment purposes means that the item never loses value to the collector.

There are many different Hummel figurines but there are some common themes to them. These include but not limited to:

One major thing to remember when collecting porcelain or anything collectible is condition matters. Condition is one of the biggest things that can effect the value of an item. In this section I cover some of the things to look out for when you are buying and antique or collectible.

You should always carefully check each item for damage. Below are some of the types of damage you should check for:

Make sure you do adequate research as this will ensure you are knowable and do not get ripped off or make a bad purchase. Remember you can also have your items valued and authenticated by a professional if you have any doubts.

Questions to Ask the Seller

When purchasing Hummels from a seller make sure you ask the following questions.

Question: How was the item stored?

If Hummels where stored or displayed in the following conditions it can cause damage or crazing to happen at a faster rate.

Question: Has the Hummel been damaged or repaired?

Questions: Do you know the history of the figurine?

Cleaning and Caring for Your Hummel

Steps for Cleaning Your Hummel Figurine

When you display your Hummels they should be displayed without touching each other. You want to keep them in an environment where they are not exposed to temperature extremes hot or cold.

Also avoid placing your figurines in direct sunlight or artificial light. Fading may take a long time to appear but it does happen. Items should not be handled too often as the oils from your skin can damage them

Whether you collect Hummel figurines for their cute and adorable design or as an investment, it can become addictive. Both experienced and novice collectors should make use of a current collector’s guide in determining the value of collectibles. You should also remember to care for your Hummel and store them properly so they can retain their value and stay in your home and collection.