Like with so many other successful brands in this world, M.I. Hummel has had its fair share of copycats and forgeries. If you have stumbled upon such a fake, don’t despair. That little Hummel piece may actually still be worth something.

Read on for information on how to spot a fake or a forgery. Some counterfeits may actually be sought after by enthusiastic collectors. After all they say “Imitation is the greatest form of flattery”.

Spotting a Forgery, Fake or Reproduction

There are some shady people out there, that will try to take advantage of the evolutionary changes that Hummel has made with their products. From the variations of their trademarks and logos, to the slight changes to a figurine’s updated design. There are many different tricks that some of these people will try to use, to dupe unaware victims out of their hard earned money. In order to avoid some of these con jobs, it is best to familiarize yourself with Hummel’s trademarks, model numbers and markings.

Differences in the Appearance

Do your research and crosscheck the figurines appearance against the Hum Number that can be found on its base. In an effort to pass some colored figurines off as uncommon or even rare pieces that have a white finish. Some con-artists would re-glaze a colored figurine with a white over-glaze. This can fool even some of the most dedicated collectors. Others may be able to notice features that were only meant to be found on a different design variation for that style of figurine. For this reason, it would be wise to have the an expert double check any figurine that you may be considering to buy, as Hummel has made changes to many of their figurine designs over the years.

A perfect example of this would be the the Goose Girl Hum Number #47, a figurine that has been released with several variations to it’s design. In earlier designs there were blades of grass between the two geese making them one solid form. As casting technology improved, later iterations reduced the size of the grass or even re-positioned the grass forward between the geese and the girl.

It is these differences in the designs that can cause some people to mistake a forgery for the real thing. It could be the addition, or even the complete removal of a feature that gives a forgery away. By familiarizing yourself with every part of a figurine’s design, you might notice the absence of a flower, a shoulder bag, or even a feather that should be in a hat. On the other hand you could see the inclusion of grass around a face, a belt when there should be none, or the aforementioned feather on the wrong side of the hat or tilted in the wrong direction. Someone who is well versed in the designs of Hummel figures, may be able to spot some of these differences for you.

It would be wrong of us to say that Hummel figurines were only ever made out of porcelain. As Hummel also used other materials such as earthenware for their prototypes, mold castings and rare releases. It is fair to state that the Hummel figurines that have been produced, have never been made from plastic, plaster of Paris, or any chalk-like plasters, substances or materials.

Many imitations, reproductions and fakes, are often made out of cheaper materials and can feel lighter then the originals. They may even have a strange texture to the touch. Being made of inferior compounds, many of these products don’t look anywhere near as good as the originals. Their color and sheen may be a lot duller then the real thing, or may even be far more vibrant and fluorescent in color.

While some of these imitations may be nothing but cheap knock offs there is still a demand from some collectors who seek to either collect these plastic/plaster based imitations on their own. Some collectors enjoy completing their Hummel collection by displaying the copies along side their originals.

Trademarks, Logos and Made In

Most imitations are made in Asian countries, such as Japan or China. Some people may view these copies as forgeries, others may think of them as nothing more then imitations inspired by the originals. Imitations that seek to only emulate and replicate the style and designs of Hummel figurines. There may also be some debate among collectors as to the validity of these products being allowed to be produced. Regardless of if people agree or not, most are not in breach of trade laws as they are not copying the Hummel figurines designs exactly, making them legally permissible.

As most of these products draw inspiration for their designs from the Hummel art style it is easy to mistake some of these imitations to be original Hummels just by looking at them. If you were to inspect these products however, the material quality differences as mentioned above can be noticed. You may also notice the absence of the proper Hummel trade marks and Hum Numbers branded into the base. There may even be a “Made in China”, or “Made in Hong Kong” branding on the bottom. Or a sticker that says “Original Hummel” or the figurines Hum Number. In either case it is advised to not trust these products as originals, and to seek the advice of an expert prior to purchase.

For more information on Hummel trademarks, see our article Find Out the Age of Your Hummel Figurine.

Aside from the aforementioned plastic figurines that some enthusiast seek to collect. There were two companies that released their own high quality figurines that look good enough to be actual Hummels. While they still remain unofficial, a collector would happily included them in their Hummel collections.

As you maybe aware, during Wold War II, the Goebel Company was forced to cease production of their Hummel figurines, by the Nazi regime. This left an opening in the market. One that was filled by a New York based company known as Ars Sacra, a subsidiary of today’s Arc Edition. Using the original Hummel styles and designs, Arc Sacra produced a small collection of their own versions of the figurines. While they did make some Hummel reproductions, these figurines usually had a foil sticker that indicated that while it was a Hummel design, it was produced by Ars Sacra in the USA.

Dubler Figurines often had a copyright date and “B. Hummel” – Berta Hummel, being Sister Maria Innocentia Hummel’s birth name –  incised into the top or side of the base. With either “ARS SACRA” or “Herbert Dubler, Inc.” as part of their markings. The Ars Sacra Josef Mueller Verlag publishing company was the first to produce products that featured the art work of Berta/M.I. Hummel in 1933. There could be as many as 50 or more, figurines that have been designed and produced by the Ars Sacra company. Most of which were made of plaster (Plaster of Paris, or other chalky plasters and materials), with a few that were cast in either bronze or silver.

These figurines where distributed throughout the united states, by the Crestwick Co. of New York. A company that would later become Goebel’s U.S based distribution company, Hummelwerk, before becoming Goebel Operations. It is this formal connection to Goebel, as well as the history and rights ownership Ars Sacra has with Sister Maria Innocentia Hummel, and the “B. Hummel” markings that has lead many to consider the Dubler Figurines to be a legitimate part of the Hummel Collection.

For more information on the history of Hummels, and the connection between Sister Maria Innocentia Hummel and Ars Sacra. See our article on The History of Hummel.

The enigma of the figurine world. The true history and origins of these models is filled with speculations and mystery. As no one truly knows where they came from or who made them. While the back stamp “BESWICK-ENGLAND” indicates that the figurines may have been produced by an established porcelain manufacture. When Royal Doulton bought out the company, they were unable to find any records that referenced the pieces in question. Nonetheless, this hasn’t squashed claims of legitimacy from many Hummel collectors.

There have been as many as twelve different designs that have been identified. Some with or without some variation of the Beswick backstamp, or the M.I. Hummel incised signature. Most have “Original Hummel Studios Copyright” inscribed in script letters, with others that have no markings at all. Despite the lack of evidence for a confirmation of legitimacy, many of these pieces remain highly sort after. With many serious collectors referring to the figurines as the “English Pieces”.

The twelve confirmed Beswicks are numbered 903-914. Mold number 907 has never been found, and as such there is some debate as to whether or not the model was ever produced.

Examples of Original Hummels and Their Imitation Counterparts 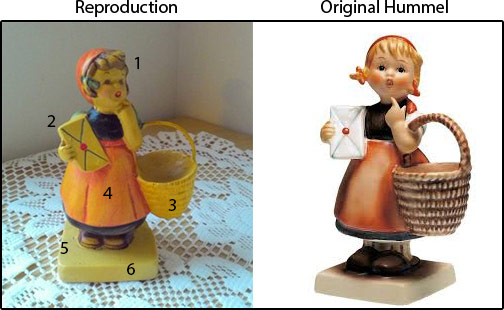 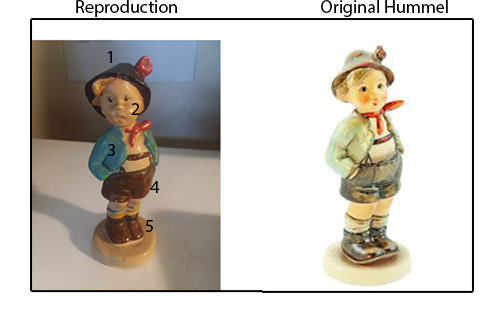 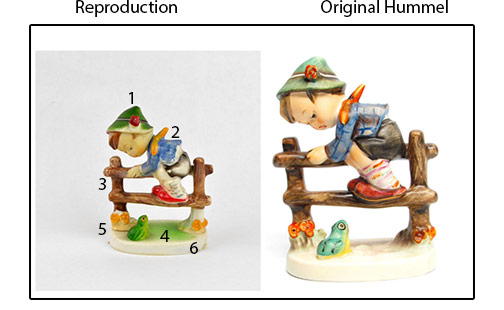