Ever since the production of the very first Hummel figurine. Sister Maria Innocentia Hummel has remained the driving influence behind the design and art style of every Hummel ever produced. As part of the history of Hummel, we will be taking a look at the life of Sister Maria Innocentia, and the how Goebel came to be the worlds leading manufacture of collectible figurines.

The Early Years Of Her Life

Born May 21st, 1909. Then Berta Hummel, was born and raised in the market town of Massing in Lower Bavaria, Germany. She was just one of six children born to loving parents Adolph and Viktoria Hummel, all of whom formed a close-knit family. Even though her sisters were more inclined to aid their mother with the household chores, they all saw the creative spark in little Berta and strove to nurture her artistic talents.

When World War I started in 1914, Berta’s father was drafted and taken away to serve in the army, when she was only 6 years old. This left little Berta without her fathers influence and she began to act out in school. Many of the teachers found this behavior to be rather taxing. Fortunately thanks to the efforts of one teacher, her talents were discovered early and she was enrolled into a religious boarding school. By studying at the Institute of English Sisters, located at Simbach, not far from Massing. Berta was able to get the artistic direction she needed to invigorate her emerging talents. Not long after starting at this school, Berta was designing costumes for the schools production. After four years of study, Berta had gone from sketching friends and family, to illustrating folktales and painting landscapes in watercolor.

Fortunately for Berta and her family, her father survived the war. In 1927, the proud father took, the then 18 year old Berta, to Munich where she was enrolled in the Academy of Fine Arts. Under the guidance of leading artists and teachers, this prestigious center of design and applied arts, provided Berta with extensive training with oils paints, fabric weaving, and clothing design.

What Influenced Berta to Become a Nun

During her time at the Academy, Berta took up residency in a dormitory run by a religious order. She chose the dormitory outside of the Academy, as it was a more similar setting to her time at the Institute of English Sisters. Residing at this dormitory, Berta was able to befriend two Franciscan nuns, who would later become a great source of comfort for her.

With the rise of Hitler’s National Socialist Party in 1929. Many students at the academy became sympathizers due to the promises of employment and economic stability that were being made by the Nazi regime. The Nazis fanatical, militaristic policies, were at odds and Berta’s simple Bavarian girl upbringing, which lead her to seek comfort in the quiet, withdrawn lifestyle of her two religious friends.

Berta graduated top of her class and was torn between accepting an offer from her teacher to remain as his assistant. Or following her need for spiritual fulfillment. By April 22, 1931, the frightening political atmosphere caused by Nazi regime helped her to make her choice.

In choosing to enter the convent of Siessen at Saulgau, Berta would be able to serve humanity through her devotion to God. From behind the cloistered walls of the convent, not only was Berta able to continue her art. She was also able to teach the kindergarten children all that she had learned herself.

In 1934, Berta took her vows, and was ordained Sister Maria Innocentia Hummel, of the Sisters of the Third Order of St. Francis.

The 1940’s saw the Nazi government attempting to close down the convent, as it had become a repatriation center for German nationals from other countries. Several nuns, including Sister Maria Innocentia, remained to help care for and look after these people. Every room in the convent, including Sister Maria Innocentia’s spacious studio, were over crowded, food was scarce and fuel was almost none existent.

Sister Maria Innocentia was unable to return to the convent during the war, as she had been diagnosed with chronic tuberculosis and was far too weak to help the other nuns with their duties.

The Birth of M. I. Hummel Figurines 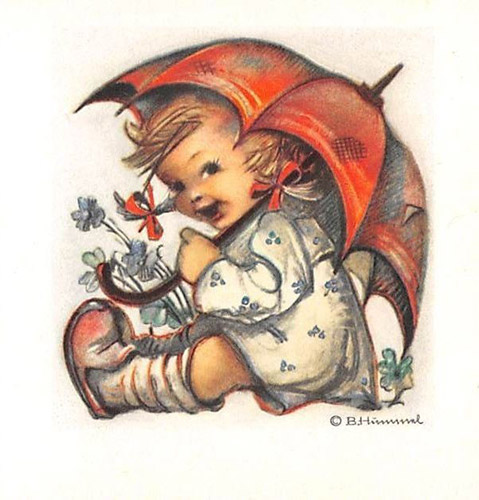 During her time teaching at the convent. Sister Maria Innocentia would sketch the children at play, creating the artwork that would one day make her famous. They stylized loose sketches, that had muted colors and often depicted country children. The enchanting children had plump cheeks, windswept hair, and an air is mischief that reminded lots of people of the cheeky carefree joy of childhood.

The art style depicted the children with shoes that were to big and oversize saggy socks. They were drawn playing games, going to school, having fun and a myriad of other activities that encapsulated a child’s joy and wonder.

Seeing great talent and potential in the artworks of then novice, Berta Hummel. The Sisters at the convent staged an exhibit in a nearby town, before sending a letter with proof sheets to a publishing company in Munich, Germany, in 1933. Appreciating the works of artist Berta Hummel, the publishing company Ars Sacra Josef Mueller Verlag, a renowned publisher of religious arts and books, requested more sketches to publish. This relationship between Ars Sacra and the convent of Siessen, would lead them to publish thirty-seven Hummel pictures, in the form of postcard motifs, communion souvenirs, and merit pictures for students.

Today the Ars Sacra Josef Mueller Verlag publishing company is known as ARS AG, and they continue to hold the worldwide rights to the original 2-dimensional artworks signed by artists Berta and Sister Maria Innocentia Hummel.

The Postcard That Made History

In 1934, an astute German manufacturer by the name of Franz Goebel, was looking for promising artist and fell in love with the art style he saw on one of the postcards printed by Ars Sacra. Realizing the great potential for these simple sketches to form the perfect basis, for a line of figurines that would have a special appeal, all their own. Franz embarked on securing the exclusive rights for turning Sister Maria Innocentia’s 2-dimensional sketches into 3-dimensional form.

On January 9th, 1935, an agreement was struck between Franz Goebel, the convent of Siessen, and Sister Maria Innocentia. Franz’s family company, W. Goebel Porzellanfabrik, a well respected German porcelain company located in Rödental, would handcraft each figurine to insure the highest quality standards. Sister Maria Innocentia insisted that the designs were to remain true to the original artworks, and that she would have final artistic control. The convent helped to guide Sister Maria Innocentia’s decisions with the designs, and together, they would personally approve each and every figurine’s design before production could begin. 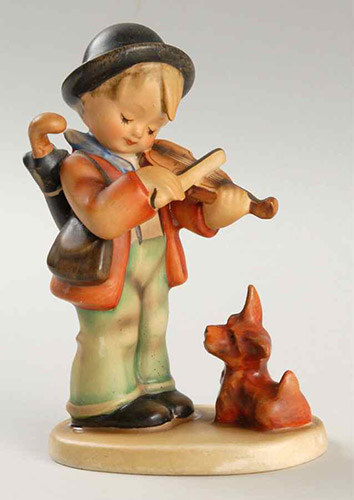 At a major international trade show, the Leipzig Fair, in 1935. The world was introduced to the very first Hummel Figurines. These figurines had an instant appeal. Whether it was the mischief, the innocence, or the rascal demeanor that the figurines portrayed. They nonetheless managed to tap into the sense of familiarity, that reminded many people of their childhood friends, and of the children in their neighborhood, and they quickly grew in popularity.

During the war, the Nazi regime forced the closure of the Hummels Figurine Factory. This created a void in production that was filled by the Ars Sacra’s New York based subsidiary. Releasing as many as 50 figurines, the Ars Sacra company produced a series based on the artwork they had acquired from Berta Hummel, and are known today as the Dubler Figurines. This means that some of their figurines are reproductions of Hummels, while others are wholly unique. For more information on Dubler, please read our article of reproductions. 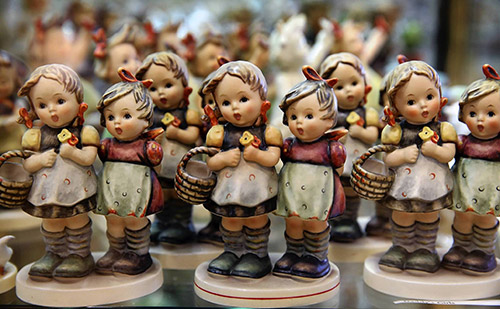 The Goebel Company still produces their Hummel Figurines, by hand crafting each and every design.

ARS AG is now a thriving international licensing company, located in Switzerland. As they continue to hold the rights to the original 2-dimensional artwork, they now licence the artwork to manufactures to produce gifts, collectibles, home decor, books, stationary, games and toys.

Where Did Sister Maria Innocentia Hummel Grow Up?

How Many Siblings Did Sister Maria Innocentia Hummel Have?

When is Hummel’s Official Birthday?

When Were the First Hummel’s Introduced to the World?

Who Holds the Worldwide Rights to the Original Artwork?