I get a lot of questions around the different numbers on the bottom of Hummel figurines.

Can you tell me what the Hummel number (Hum number) is?

There is a hand painted number on the bottom of my Hummel can you tell me what this means?

Can you tell me what the etched number means?

Which number do I use to identify my Hummel?

In this article I will answer these questions. 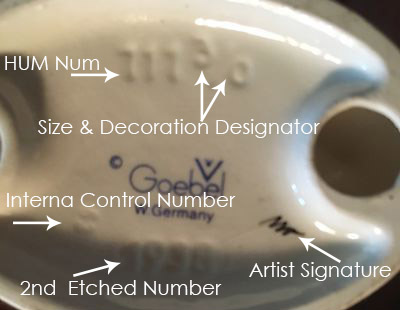 This article will explain everything about the Hummel numbering system including the designators.

*Note in some cases the HUM number can be hand painted.

The hand painted number is usually a 2 digital number

2nd Etched number – There is sometimes a 2nd etched number this number can mean a few different things.

Sometimes this is a year however it may not be the year the Hummel was made.

This can be one of the following

Identifying your Hummel – The HUM number is always used the identify your Hummel. Note in some cases the name of some Hummels has changed over the years, however the HUM number will not.

You can read more about identifying your Hummel here.

You can find a list of Hummel’s by number here if you are looking for their names.