Vintage and antique glassware covers a wide array of various types of categories that range from containers and bowls to vases and platters; all of which are not only highly functional, but they are also strikingly beautiful as well. Vintage and antique glassware was crafted between the late 1800s through the mid-1900s, and some of the most notable examples of craftsmanship include cut glass, pressed glass, carnival glass, elegant glass, milk glass and Depression glass. Here, we will be exploring the incredible world of antique and vintage glass and how styles have changed and developed over time. 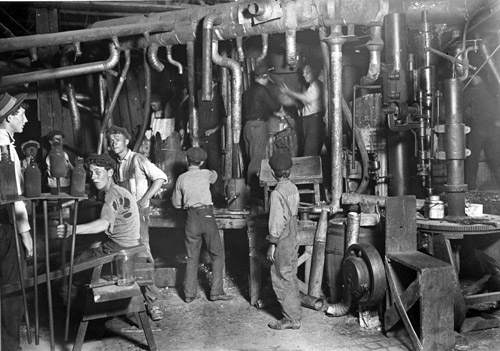 Let us begin with cut glass; cut glass is the oldest form of glassware, and dates back to approximately 2,000 years ago, which is closely tied to the introduction of glassblowing itself in many Western regions. Glass was cut by simply holding a cooled piece of glass up to a grinding wheel to create and carve grooves in the side of the glass. This effect was often also utilized to create beautiful patterns, decorations and designs. Carved glass is yet another form of cut glass and the earliest surviving example of this technique, is a piece of 1st-century cameo glass that is regarded as the Portland Vase. Interestingly, a top layer of white glass was carved away and revealed a background of dark blue glass behind it the white images.

It was during what is known as the “American Brilliant” (1876-1917, respectively) period that consisted during the late 19th century until the early part of the 20th century, in which leaded crystal that was intricately cut in one’s home was a clear cut sign of one’s social status and hierarchy. Unfortunately however, this era was quite brief due to the interruption of World War I and eventually the Great Depression, when significantly less-expensive pressed glassware was enveloped by smart shoppers.

The production of pressed glass began to escalate in the United States during the mid-1800s, this is when the Early American Pattern Glass (or EAPG) industry started to truly perfect itself. Countless manufacturers such as New England Glass Company of Cambridge (Massachusetts), and Cambridge Glass Company of Cambridge (Ohio) and McKee of Pittsburgh (Pennsylvania) were pioneers and innovators in the field of glassware. Many of these various industries would often produce quite similar patterns with very subtle differences in order to avoid lawsuits. Throughout the 1920s, pressed-glass manufacturers in the United States felt the blow as cut glass from France (Baccarat) and Ireland (Waterford) started to became far more affordable. However, when the stock-market crashed in 1929 it in turn gave wave to even less-expensive forms of pressed glass, cheekily referred to as Depression glass. One company in particular created quite a stir in terms of recreating the industry, Anchor-Hocking (Ohio), manufactured glassware at an incredible rate, producing approximately ninety pieces of glassware per minute, which permitted it to be able to sell countless patterns such as Circle, Mayfair, Spiral, and other popular designs for literally pennies per product.

At this same time, many companies such as Fenton and Northwood were crafting and producing a cheaper, but strikingly similar “Tiffany Favrile” which they deemed carnival glass, as it was often given away as a prize at carnivals across the nation. Fenton alone created approximately 150 different patterns of carnival glass, with equally beautiful names such as Thistle, Peacock Tail, Waterlily and Cattails, and Wreath of Roses. Due to the fact that the world of glassware competition was so incredibly tight, numerous companies began to use all kinds of forms of visual techniques in order to be able to better distinguish themselves. One interesting example of this is known as “Vaseline” or uranium glass which was crafted throughout the 1930’s. Uranium glass was known to glow green when it was exposed to UV light due to its sprayed coating of uranium salt on the surface of the glass itself. Uranium glass additionally was often used for tableware and household items, but began to fall out of widespread use and popularity when uranium availability to the vast majority of industries was drastically curtailed during the Cold War.

The world of glassware and its incredible growth, decline and regrowth is most certainly an interesting and fascinating tale. There are so many stunning and affordable antique pieces available that tell a unique and wonderful story of the formation of them to the shelves that they had so long sat upon. From cut glass to carnival glass, glassware is undoubtedly an industry that significantly evolved from the 1st century, up until our modern day. And each and every single piece is remarkable of its very own culture and craftsmanship. Regardless of the type of glassware that you perhaps may prefer, you can be sure to find a uniquely beautiful piece to add to your personal antique and vintage collection.